What on Earth is going on here? 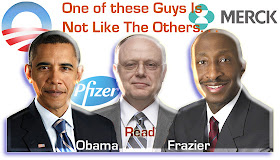 I am put in mind of the old PBS Sesame Street song -- as it continues -- from the headline verse, with: ". . .Can you guess which one is not like the others, before I finish my song?" See:

Last week (as I mentioned here), something called the National Center for Public Policy Research -- a supposed conservative think tank and political activism organization -- in the person of its General Counsel, Mr. Justin Danhof, showed up at the Merck shareholders' meeting, to again complain about money spent, primarily through PhRMA (by Merck -- and many others), in support of closing the donut hole, via the Affordable Care Act, and measures aimed at health care reform, generally in the United States. 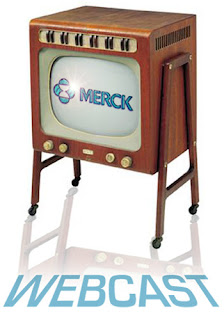 year -- most notably at Pfizer -- making Jeff Kindler their focal point. [All to no avail, obviously. No surprise there.]

This year, it seems Mr. Danhof has focused on Merck, to the exclusion of Pfizer -- (having not bothered to put in a shareholder proposal at all, at Pfizer) -- even though Bridgewater, NJ (Merck's meeting site) is a longer drive from DC, than Morristown, NJ (Pfizer's April 26, 2012 meeting site).

And so, it occured to me (in Sesame Street fashion!) over my coffee this morning -- to ask: WHY would CPPR do that?

Why, indeed? [If you are still in the dark, here, do play part two of the compare/contrast game, below!]

In any event, here's a quote from a press clip on the CPPR:

"This year we went again to see, now the legislation appears poised for a downfall next month when the SCOTUS decision comes out, if they had changed their position," Danhof says. "Merk's CEO, Kenneth Frazier, informed us they stood by their support and so that's why I titled the press release, 'Merck Triples-Down on Liberalism.' Last year they doubled; this year they tripled. . . ."

Okay -- now let's play the game, again: Can you guess which one, this time? [PhRMA members, below -- one and all!] 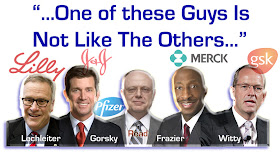 Well, there you have it: a conservative think tank and advocacy group that -- in this election year -- chooses to complain (repeatedly in the press) only to the public pharma company with a black CEO. I'd say I'm surprised, but the truth is that I've seen too much of this to be surprised by these sorts of republicans. And yes, that's a small "r". Now you know.

Finally -- it is also worth noting that -- even if we accept CPPR's contention, that Merck shouldn't lobby for such things -- in this case, the failure to lobby would harm the shareholders' pecuniary interests. Curious. . . indeed.